Proteomics is relevant not only to human health and disease, but also to animal species. In an exciting collaboration with the Leibniz Institute for Zoo and Wildlife Research (IZW) in Berlin, Germany, and the National Institute of Standards and Technology (NIST) in Charleston, USA, we profiled the blood proteome of 45 wild cheetahs from Namibia, Africa, to gain new insights into their underlying molecular biology and understand how male and female cheetahs differ.

Mass spectrometry proteomics is fast becoming a popular tool in clinical research, where it can be used across all stages of research from target discovery to clinical trials. However, it also has huge potential for fundamental biology in a wide range of species.

While most often applied to laboratory animals, proteomics can also be used for animal research in general, for which much less is known compared with well-characterized lab species. In fact, mass spectrometry proteomics is ideally suited for studies of animals, where the target proteins may be entirely uncharacterized.

Unlike affinity-based proteomics approaches, which rely on specific antibodies or aptamers, mass spectrometry is all inclusive and doesn’t require prior knowledge or reagents for the proteins of interest. It can also go deep into the entire proteome and is quantitative and reproducible at scale from tens to thousands of samples, allowing researchers to analyze and compare samples from multiple specimens and time points.

We recently demonstrated the power of Biognosys’ mass spectrometry proteomics technology for animal research in an exciting new study looking at the proteome of wild cheetahs living in Namibia in Southern Africa.

Not all cheetahs are alike

Although the behavior and ecology of cheetahs have been well studied, we know comparatively little about their underlying molecular biology. This is particularly true for their proteome composition, which has been virtually unexplored until now.

To understand more about the molecular biology of wild cheetahs, we brought our proteomics expertise to the Departments of Evolutionary Ecology and Wildlife Diseases from the Leibniz Institute for Zoo and Wildlife Research (IZW) in Berlin and the NIST in Charleston, working together Dr. Bettina Wachter, Dr. Gabor Czirjak and Dr. Ben Neely to understand the phenotypic differences between cheetahs in different life stages.

The IZW team has been studying wild cheetahs roaming Namibian farmland since 2001, focusing on developing sustainable ways to resolve cheetah-farmer conflict. An important solution lies in understanding the unique social system of cheetahs.

As previously discovered by the IZW team, cheetah males either defend small territories or roam in large home ranges covering several territories (“floaters”) [1]. These territories are not adjacent but are separated by around 23 km [2].

Floaters try to take over a territory from a resident male because they get preferential access to females. When they succeeded in doing so, their behavior and phenotype changes within a couple of months. They become aggressive and their muscle mass increases significantly [1]. This is remarkable, because in other species such physiological changes always occur before the takeover of a territory, not after.

It is not known what triggers the behavioral and physiological changes in floaters once they became territorial. However, preliminary studies of the IZW demonstrated that it is not triggered by the male sexual hormone testosterone. Therefore, we delved into the proteome of the two cheetah male types to shed light into this striking change in body composition, as well as the underlying biological differences between male and female cheetahs.

The team of the IZW humanely captured wild cheetahs with box traps at cheetah marking trees, fitting them with GPS collars and collecting blood samples. Blood samples were transported to the research station, centrifuged and plasma samples were frozen in liquid nitrogen for transportation to the IZW.

For this study, plasma samples of 45 cheetahs were selected, including 15 females, 15 territorial males and 15 floater males, collected between 2004 and 2021. The samples were stored frozen at the IZW for up to 18 years before reaching us at Biognosys and still remained viable for analysis, showing that this approach could be used for similar research programs.

Once we received the samples at Biognosys, we set to work analyzing them using data-independent acquisition (DIA) mass spectrometry, our specialist workflow for discovery proteomics with our TrueDiscovery™ platform.

This workflow uses Hyper Reaction Monitoring (HRM™) to quantify differentially expressed proteins across the entire proteome. The method also generates peptide-level information for all detectable proteins. With our proprietary protein libraries, we can now identify almost 100,000 peptides in biofluids such as plasma.

Using this methodology, we identified almost 2,000 proteins and 20,000 peptides in plasma – the most detailed analysis of the plasma proteome of cheetahs gathered to date.

Although full analysis of these exciting new results is ongoing, we can already reveal that there are interesting biological clues hidden within the cheetah proteome.

Principal component analysis (PCA), a statistical method used to analyze the information contained in large datasets, was applied to the cheetah proteome samples and could distinguish between the two cheetah male types and the females (Figure 1). 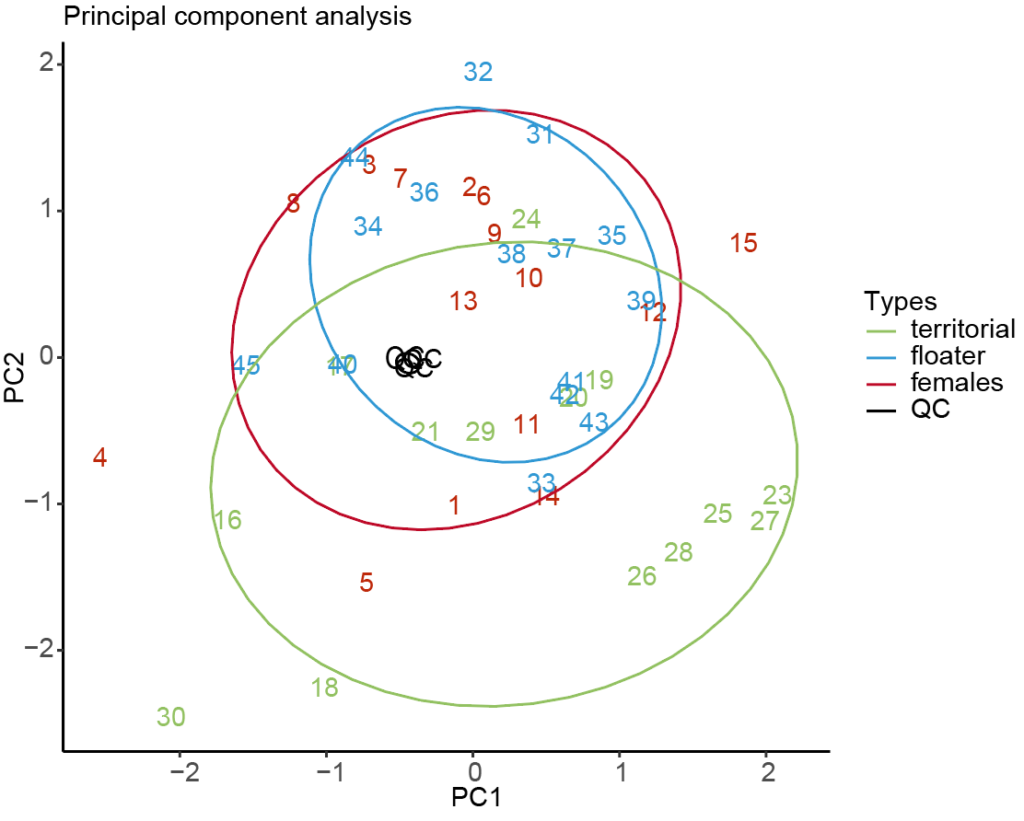 We also saw significant differences in post-translational modification (PTMs) of the proteome samples, such as methylation and hydroxylation, which can change the properties of proteins and may explain functional differences between groups. Further research is required to understand the biological context of these modifications and how they relate to the different cheetah phenotypes.

We are deeply encouraged by these findings, which are just the beginning of a much larger project. We are continuing to analyze the data and expect to make more exciting discoveries, with a paper to be published soon.

For example, we are planning to use proteomics to study the extraordinary immune system of wild cheetahs. All of the 500+ wild cheetahs trapped and released by the IZW team over the years are clinically healthy and have a very strong constitutive immune system, despite being infected with various pathogens [3,4,5]. In contrast, cheetahs living in zoos often show clinical symptoms when infected with pathogens.

Comparing the immune proteomes of wild and captive cheetahs could help us to understand what helps the wild cheetah fend off disease so capably, with potential applications in animal and human health.

We believe cutting-edge proteomics approaches hold much promise for animal research, both in laboratory and wild animals to support fundamental biology and conservation research.

More than this, discovery proteomics is a key technology for research in life sciences. There are many important discoveries waiting to be made in the deep ocean of the proteome, opening up new avenues of exploration and understanding of how life works.

At Biognosys, our next-generation platform for discovery proteomics – TrueDiscovery™️ – is the only technology that searches the complete proteome to reproducibly identify and quantify thousands of proteins at scale.

Whatever your research species and wherever in the world they live, get in touch today to discuss how our next-generation proteomics tools can unlock their biological secrets.

Back to Blogs overview

Access our knowledge base with relevant resources and guiding information.

We use cookies on our website to give you the most relevant experience by remembering your preferences and repeat visits. By clicking “Accept”, you consent to the use of ALL the cookies.
Cookie settingsACCEPT
Manage consent

This website uses cookies to improve your experience while you navigate through the website. Out of these, the cookies that are categorized as necessary are stored on your browser as they are essential for the working of basic functionalities of the website. We also use third-party cookies that help us analyze and understand how you use this website. These cookies will be stored in your browser only with your consent. You also have the option to opt-out of these cookies. But opting out of some of these cookies may affect your browsing experience.
Necessary Always Enabled
Necessary cookies are absolutely essential for the website to function properly. These cookies ensure basic functionalities and security features of the website, anonymously.
Functional
Functional cookies help to perform certain functionalities like sharing the content of the website on social media platforms, collect feedbacks, and other third-party features.
Performance
Performance cookies are used to understand and analyze the key performance indexes of the website which helps in delivering a better user experience for the visitors.
Analytics
Analytical cookies are used to understand how visitors interact with the website. These cookies help provide information on metrics the number of visitors, bounce rate, traffic source, etc.
Advertisement
Advertisement cookies are used to provide visitors with relevant ads and marketing campaigns. These cookies track visitors across websites and collect information to provide customized ads.
Others
Other uncategorized cookies are those that are being analyzed and have not been classified into a category as yet.
SAVE & ACCEPT